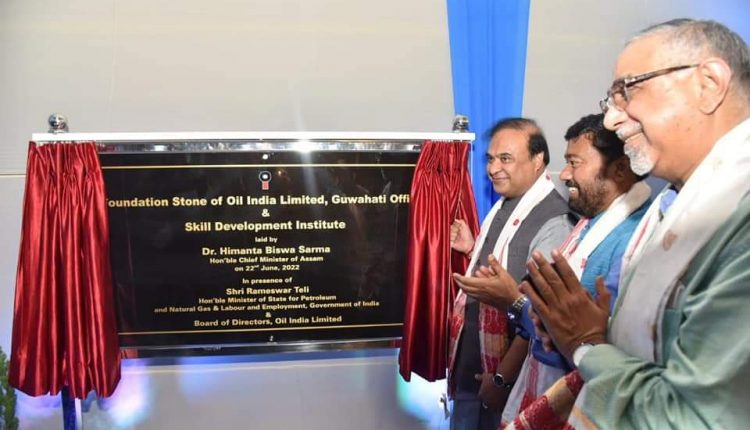 Dr. Sarma Lauds role of OIL in socio-economic growth story of the state

The multi-storeyed structure, to be completed at a cost of Rs. 200 crores on land measuring 5 bighas which has been allotted by the Government of Assam to the public sector oil major through a land-lease agreement, is slotted to serve the twin purpose of being an office of Oil India as well as a skill-training institute.

Addressing those present at the event, Chief Minister Dr. Sarma said: “I am confident this upcoming structure would provide a major boost to the business expansion plans of Oil India Limited”, adding, “The public sector oil major expanding its businesses has a both direct and indirect positive impact on Assam’s economy. In days to come, I would like to see it (OIL) playing a larger role in the growth story of Assam that is being witnessed of late.”

“OIL has made immense contributions towards socio-economic development in the state. Be it providing direct or indirect livelihood, or awarding royalty, or coming forward with corporate social responsibility-related activities, the role of Oil India is immense,” Dr. Sarma added. 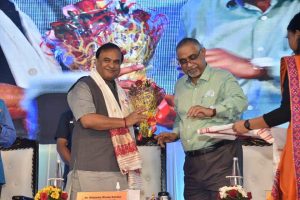 The Chief Minister, during his speech, praised the role of Oil India Limited Chairman & Managing Director Sushil Chandra Mishra for his handling of the Baghjan oil-field fire incident. “CMD Sushil Chandra Mishra deserves special mention for the leadership skills he displayed during the Baghjan incident. Credit goes to him for controlled the situation with minimal losses to the people as well as the organization,” the Chief Minister stated.

Happy to unveil a plaque to mark laying of foundation stone for Oil India Ltd’s office-cum-Skill Development Institute in Guwahati.

The office-cum-institute will be built at a cost of ₹200 cr on a plot of 5-bigha land given by GoA on a long-term lease. pic.twitter.com/3ucC58fvjo