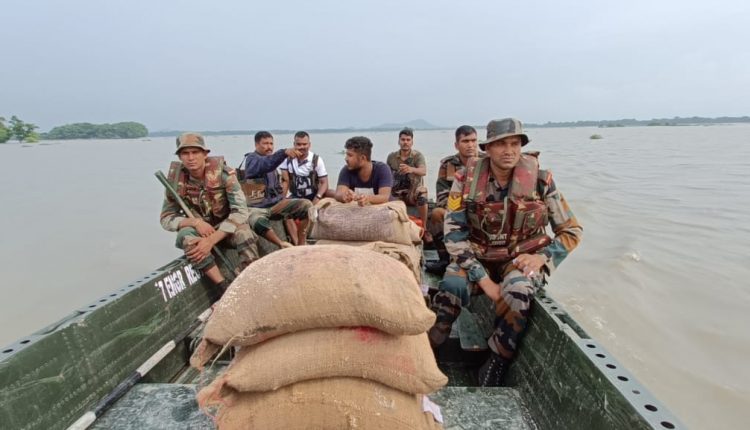 AZIR KHOBOR, BORPETA, 23RD, 2022 : Indian Army continued to support the local administration on the seventh day of rescue and relief operations in the districts of Darrang, Barpeta and Kamrup Rural. Seven composite columns have been consistently working day and night to reach out to farthest and remotest flood affected areas to provide supplies and medical succour.

In Kamrup district relief material are being pushed to the flood affected villages in Hajo, Kamalpur , Amingaon and Changsari . The Indian Army doctors also provided medical support for stranded locals at Fatima school for the second day at Rangia. They also assisted in maintaining good hygiene conditions of the temporary camp. In Darrang district the army column launched rescue ops in village Dhandkundapara, Dariapara & Bhalukhuapara in Mangaldoi circle. In Barpeta district, the army column rescued locals stranded in Bhatkuchi village . In an intense and long operation for providing medical assistance to a stranded patient in his 70s, a doctor was transported from Mathabari to Situli on an Army boat for almost 45 minutes.