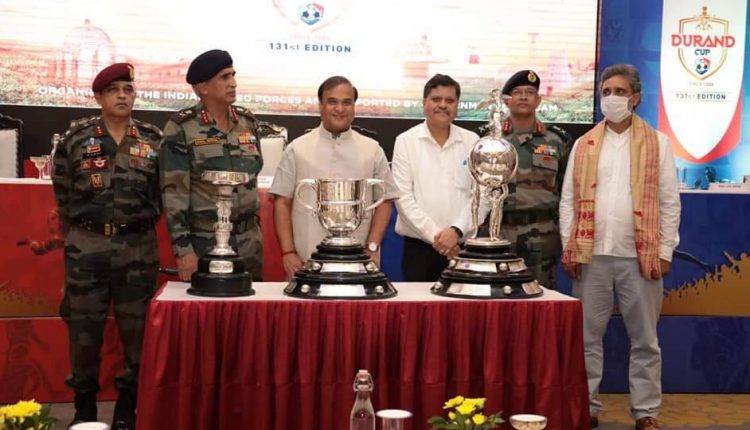 AZIR KHOBOR, GUWAHATI, JULY 22, 2022: Himanta Biswa Sarma,  Chief Minister, Assam, unveiled the three Durand Cup trophies in a glittering ceremony at a city hotel on Thursday. The 134-year old iconic Durand Cup football tournament will be hosted by the state for the very first time and as part of a Trophy Tour involving five-cities, Guwahati, the venue for 10 Group D games, was chosen as the first stop.

Also sharing his thoughts was Lt. Gen. Repswal, SM, VSM, SM, VSM, Chief of Staff, Eastern Command and Chairman Durand Organising Committee, saying, “I thank the Hon. Chief Minister for taking time out from his busy schedule, to encourage us in this effort at promoting and spreading the love of the game of football further in the state. The cooperation from the Assam Government has been phenomenal and we are confident that this will herald a new beginning for the game in the state.”

The century old tournament is getting bigger and better this year with 20-top teams of the country, including all 11 teams from the top division Indian Super League (ISL) participating, up from 16-teams last year. The matches in Guwahati will be held at the Indira Gandhi Athletic stadium in the city from August 17th to September 4th, 2022. 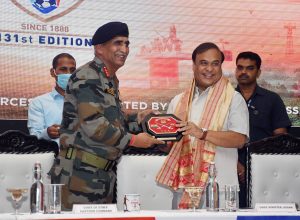 The three trophies, the Durand Cup (a rolling trophy and the original prize), the Shimla Trophy (also a rolling trophy and first given by the residents of Shimla in 1904) and the President’s Cup (for permanent keep and first presented by Dr. Rajendra Prasad, India’s first President, in 1956) are on a five-city TOUR.

It was flagged off from Kolkata on July 19, 2022 and after being in Guwahati for two days will proceed to Imphal in Manipur, the first time hosts. It then proceeds to Jaipur, as for the first time the state of Rajasthan would be fielding a team and will then make a final stop at the home of the defending champions FC Goa before returning back to Kolkata on July 31st, 2022, the venue of the opening game on August 16th, 2022, as well as the Grand Finale on September 18th , 2022.

There will be a total of 47 games in the 131st Durand Cup edition, with both Guwahati and Imphal hosting 10-games of group C and group D each, evenas all the seven knockout games are held in three West Bengal venues. The opening pool matches are slated to begin on August 16that Kolkata’s Vivekananda Yuba Bharati Krirangan (VYBK) stadium, August 17th at Guwahati’s Indira Gandhi Athletic stadium and August 18th at Imphal’s Khuman Lampakh stadium.The Tournament will culminate with the Grand Finale scheduled on September 18, 2022, at VYBK.

For the latest news and information about The Durand Cup please visit our website www.durandcup.in

A symbol of India’s football history and culture, the Durand Cup is Asia’s oldest and the world’s third oldest football tournament, held between 16 top Indian football clubs across divisions. Organized by the Indian Armed Forces, the Durand Cup has been the breeding ground for India’s best footballing talent, over the years.

The inaugural edition happened in Shimla in 1888, when it started off as an Army Cup, open only to the British Indian Army troops in India, but soon opened up to civilian teams. Named after its founder, Sir Mortimer Durand, Foreign Secretary of British India from 1884 to 1894, the iconic tournament reached its 130th edition in 2021. Mohun Bagan and East Bengal have been the most successful teams, winning the tournament 16 times each. 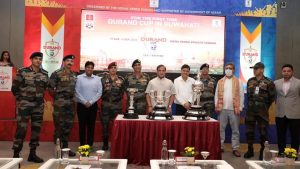