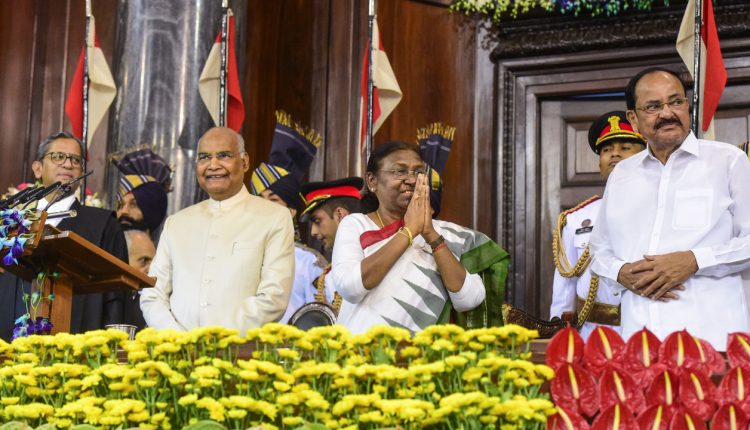 She called her nomination as evidence that the poor in India "can not only dream but also fulfill those dreams".

Delhi, July 25th,2022: In Monday Droupadi Murmu sworn in as India’s 15th President at an impressive ceremony in the packed and historic Central Hall of Parliament.

Hailing from the Schedule Tribe caste, Santhal community, Murmu is the first tribal leader to assume the office of the President.

Dressed in a white saree with green and red border, Murmu took the oath of office in the name of God in Hindi to “preserve, protect and defend the Constitution and the law”.

Murmu was given a 21-gun salute after which she signed the oath register amid a thunderous applause and thumping of desks.

The oath-taking ceremony was marked by pomp and grandeur, and began with the arrival of outgoing President Ram Nath Kovind and Murmu in a procession from the Rashtrapati Bhavan to the Parliament Building.

After the short ceremony, Murmu and Kovind were escorted out of the Central Hall amid the roll of drums and blowing of trumpets.

After a national salute by the President’s Bodyguard at Gate No 5 of the Parliament, the new President and her predecessor left in a ceremonial procession to the Rashtrapati Bhavan.

At the forecourt of the Rashtrapati Bhavan, the new President inspected the tri-services guard of honour.