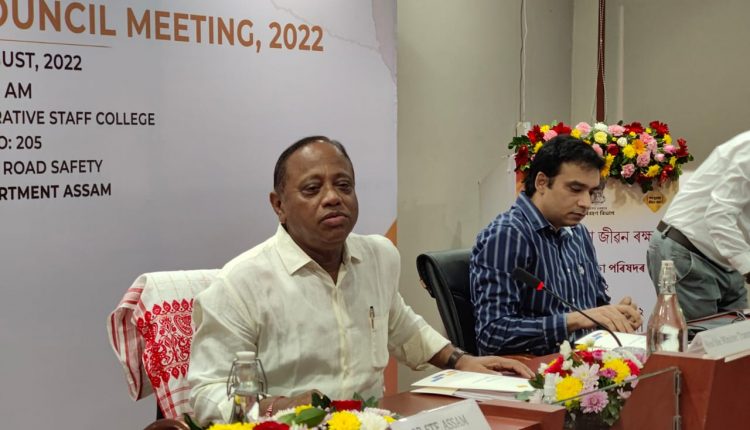 AZIR KHOBOR, GUWAHATI , AUGUST 1, 2022 : A number of vital decisions were taken at the meeting of the State Road Safety Council (SRSC), Assam here on Monday to make the state roads safer.

Chaired by Transport Minister, Parimal Suklabaidya, who is also the Chairman of SRSC, Assam, the three-hour long meeting held at the Assam Administrative Staff College took a number of important decisions to make roads of the state free of accidents and fatalities.

Suklabaidya directed the senior officials of Transport and other line departments to take measures to check over-speeding of vehicles, as 70 per cent of accidents are accounted for this.

The Minister instructed the Panchayat and Rural Development Department to conduct awareness drive amongst two and four wheelers at the Gaon Panchayat level in coordination with the respective DTOs.

He asked the officials to put up road signages in Assamese and other languages more widely along the roads for better understanding by motorists. In the same vein, he instructed the SRSC to design vehicles with road safety messages and audio visual system so that they can act as mobile awareness vehicles.

Suklabaidya asked the NHAI, NHIDCL and PWD(NH) authorities to repair the potholes to prevent road accidents.

The Minister also reviewed the status of black spots in the National Highways with the officials of NHAI, NHIDCL and PWD(NH).

He directed the NHAI to organise awareness camps on a regular basis.

He also reviewed the status of Trauma Centres coming up soon across the state with the officials of Health and Family Welfare Department.

The Minister directed the Member Secretary of SRSC to monitor the proper functioning of interceptor vehicles and ensure that the vehicles cover the rural areas too.

He directed the Transport Department to work in sync with the Assam Police to ensure strict vigilance over wearing of helmets and checking over-speeding of vehicles.

It was decided in the meeting that SRSC would allot interceptor vehicles to the Assam Police.

The meeting decided to induct support staff in the District Road Safety Committees to ensure better coordination between the state level and district level committees.

It further decided to allot breath analysers to the Excise Department and for deployment of personnel on roads to ensure strict checking and punitive action against ‘Drink & Drive’.

“We will be focusing more on the things that are essential on the roads to avert accidents. This includes following up with the Assam Police and other stakeholders for putting up signboards, road signals, speed breakers, reflectors, cat eyes, dividers,” said a Transport Department official.

He added that with proper infrastructure and awareness among motorists, the rate of road accidents will certainly come down.

The Transport Minister also held a meeting with IIT, Guwahati to discuss on the proposed Road Safety Conclave to be jointly organised by Transport Department and IIT, Guwahati.

It may be mentioned that the Transport Department has collaborated with IIT, Guwahati and nominated the latter as its Knowledge Partner.