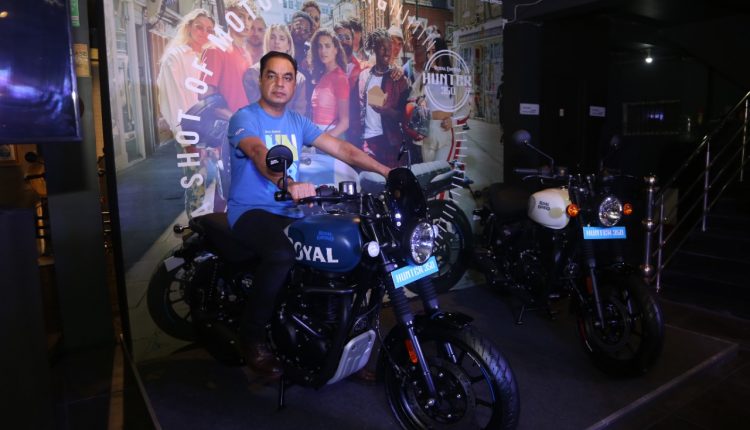 THE ROYAL ENFIELD HUNTER 350 A SHOT OF PURE MOTORCYCLING, NOW IN ASSAM

AZIR KHOBOR, GUWAHATI, AUGUST 27, 2022: Royal Enfield, the global leader in the mid-sized (250cc-750cc) motorcycle segment, today launched the new Hunter 350 in Guwahati. Engineered and designed for the urban hustle, the new Hunter 350 is a remixed roadster with the character of a Royal Enfield reimagined in a stylish, compact-yet-muscular geometry, that can tackle crowded city streets, suburban backroads and beyond, with aplomb.

Commenting on the inspiration of the new Hunter 350, Royal Enfield CEO, B Govindarajan, said, “At Royal Enfield we are closely engaged with our consumers and community. Their desires and aspirations shape the motorcycles we make and we are always looking to create newer experiences and newer formats of pure motorcycling for them. There were always a set of passionate motorcyclists that loved our brand, but did not find the right kind of attitude within our portfolio. The Hunter 350 is for them. It is a motorcycle that combines the strengths of seemingly different species, and brings it together in a super stylish and fun package that is an all-new flavour of pure motorcycling with the unmistakable Royal Enfield character.”

The Hunter 350 is distinctly unique within the Royal Enfield line-up. Built on the award-winning 350cc J-series platform, combined with a highly flickable Harris Performance chassis, the Hunter delivers agility without fragility on city streets and sheer, grin-inducing pleasure on the open road.

Walk up to the Hunter 350 and you’ll long to jump on this fun, tactile motorcycle with its old school analogue meets new age vibes. Fire it up and you’ll be greeted with an appealing burble that transforms into a spine-tingling growl as you accelerate away. Cut through congested streets thanks to its compact geometry, nimble steering and confident braking. Take it beyond the city limits and this remixed roadster will glide along the straights on wide alloys and tubeless tyres. Then, angle it into twists and turns and its firm and ultra-responsive chassis and torquey 350cc engine will light up your senses.

Commenting on the launch of the Hunter 350 in Guwahati, Yadvinder Singh Guleria, Chief Commercial Officer, Royal Enfield, said, “The Hunter 350 is an outcome of several years of insight gathering and consumer studies from across the world. It is a motorcycle that feels right at home in big metropolises and is exciting for the experienced rider, and easy and accessible for a new rider. Its shorter wheelbase, more compact geometry and lighter weight makes it very nimble and maneuverable within the urban context. In Assam, we are very confident that this new reimagined roadster will usher in a whole new set of consumers, into our world of pure motorcycling.”

Sound, colour, styling, handling, performance – everything about the fleet-footed Hunter 350 is designed to wake you up with an experience like no other.

It comes in two distinct editions – Retro Hunter and Metro Hunter – both finished with on-trend, blacked-out engines and components. The Retro Hunter runs on 17” spoked wheels and has a 300mm front disc brake combined with a 6” rear drum brake, single channel ABS, an uncluttered retro-styled digital-analogue instrument cluster that displays just the right amount of essential information and a choice of two classical, single-colour tanks.

The Metro Hunter has a more contemporary look with dual-colour liveries, cast alloy wheels, wide tubeless tyres, and rounded rear lights. There are five colourways across two editions on the Metro Hunter. A selection of three chic tank colour and graphics options on one edition, and the top of the range edition, finished with a choice of three of the most distinctive and disruptive petrol tank designs ever to adorn a Royal Enfield. It is also compatible with Royal Enfield’s acclaimed Tripper TBT navigation which is available to order as a Genuine Motorcycle Accessory.

The Hunter was conceived and developed by the talented designers and engineers at Royal Enfield’s two state-of-the-art technology centers, in India and the UK, and renowned chassis experts, Harris Performance. Their mission – to deliver an exhilarating ride experience; a fusion of the superlative J-series engine with refreshed chassis proportions for enhanced agility and responsiveness.

The chassis geometry on the Hunter 350 is designed to give the optimal height-to-weight ratio while offering superior comfort, thanks to its wide, long, one-piece seat. With revised rake and trail angles, a lower 800mm seat height and shorter wheelbase, the Hunter’s exceptional maneuverability encourages greater confidence when carving through cramped streets and feels planted and stable in every location and situation.

The Hunter is powered by the modern, globally acclaimed 349cc air-oil cooled single cylinder J-series engine, recently launched on the Meteor and Classic 350. Fuel-injected, it produces 20.2 bhp at 6100 rpm and 27 Nm of torque at 4000 rpm resulting in strong, low-end grunt, super smooth linear power delivery with an engine calibration to give a lively throttle response and a distinctive exhaust note to suit the character of the Hunter. With a primary balancer shaft to cut down vibrations, it feels both responsive and refined while its gear shifting is crisp and smooth thanks to an optimized 5-speed gearbox.

The Hunter is supported by an ecosystem of Genuine Motorcycle Accessories. These can be added when ordering the bike, on Royal Enfield’s user-friendly App and MiY (Make It Yours) personalisation platform or at a later date. The Suburban range features protective and functional attachments, such as engine and sump guards, pannier mounts and luggage, custom seat and touring mirrors. Options in the Urban range include a signature bench seat, black LED indicators, a tinted flyscreen and a minimalist ‘tail tidy’ rear end. All have a premium finish and are a hassle-free fit straight onto your motorcycle. For further self-expression, a selection of superior riding gear, including gorgeous helmets in complementary colours, t-shirts and smart personal accessories are available.

Aimed at young riders, the Hunter is available for test ride and bookings in Assam. the new Hunter 350 starts at INR 1,49,900/- for the Factory series, INR 1,63,900 /- for the Dapper Series and INR 1,68,900 for the Rebel series (ex-showroom, Assam). Available in exciting colour options such as Rebel Blue, Rebel Red, Rebel Black, Dapper Ash, Dapper White, Dapper Grey, Factory Black and Factory Silver.

Customers can discover, book a test ride, book and customize their Hunter 350 via the Royal Enfield App, on the company website at royalenfield.com or at their nearest Royal Enfield dealership.

Royal Enfield’s premium line-up includes the all-new Meteor 350 cruiser, Interceptor 650 and Continental GT 650 twins, the Himalayan adventure tourer, and the iconic Bullet 350 and Classic 350 singles. Riders and a passionate community are fostered with a rich profusion of events at a local, regional and international level. Most notable are Rider Mania, an annual gathering of thousands of Royal Enfield enthusiasts in Goa, and Himalayan Odyssey, a yearly pilgrimage over some of the toughest terrain and highest mountain passes.

A division of Eicher Motors Limited, Royal Enfield operates through more than 2100 stores across all major cities and towns in India and through nearly 850 stores in more than 60 countries around the globe. Royal Enfield also has two world-class technical centres, in Bruntingthorpe, UK, and in Chennai, India. The company’s two state-of-the-art production facilities are located at Oragadam and VallamVadagal, near Chennai. Across the world, Royal Enfield has three modern CKD assembly facilities in Thailand, Argentina and Colombia. With more than 37% CAGR for the last 5 years and sales in international markets up 108% in 2021-22, Royal Enfield is the leader in the global mid-size motorcycle market.