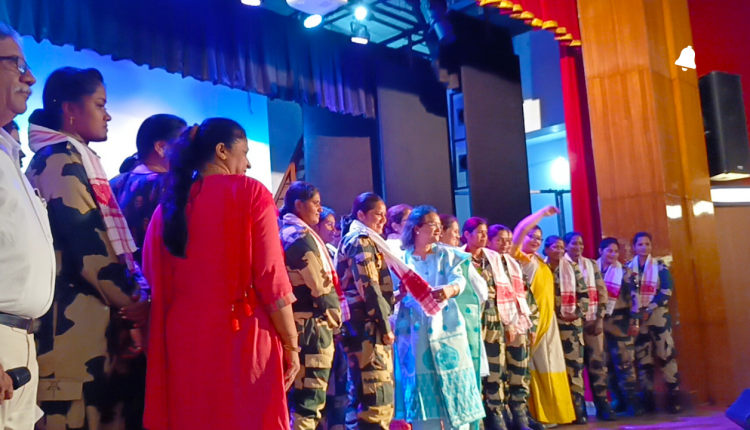 By Ranbir Hanse On Sep 1, 2022
Share FacebookTwitterWhatsAppEmailPrint
Guwahati, September 01: In the series of events being organized under “Azadi Ka Amrit Mahotsav” BSF motor cycle rally comprising “Janbaz and Seema Bhavani” motor cycle squad of Border Security Force showcased its daredevil show at Guwahati, in which total 34 men and women Motorcyclists of the force participated.
On September 1st, the rally was flagged off from BSF Shillong Frontier and entered Guwahati at the evening and reached Veterinary College (Khanapara) where the team was felicitated by greater Lions Club Guwahati accompanied by melodious tunes of BSF band. Thereafter a Motor cycle daredevil show was presented at Royal Global University, where Prof. Dr. S.P. Singh Vice Chancellor in presence of a large number of students, NCC cadets welcomed the rally. 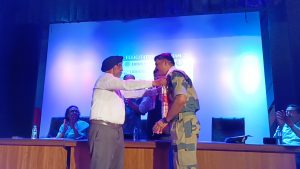 At Royal Global University, “Janbaz and Seema Bhavani” Motorcycle riders performed amazing feats and stunts with motorcycle, which mesmerized the spectators resulted into thunderous applause and chants of “Bharat Mata Ki Jai”. The available gathering encouraged the motor cycle riders with full enthusiasm.
After this, the members of the rally met with the NCC cadets, students and youth present and motivated them to inculcate spirit of patriotism and national unity, awareness against drugs and shared information about Border Security Force and motivated them to join Border Security Force as career to serve the nation with pride

As per schedule, the motor cycle rally will leave Guwahati on the morning of 2nd September 2022 and further reach to Dhubri as its next stop via Nalbari, Barpeta Road, Bogaigaon and Kokrajhar.
Share FacebookTwitterWhatsAppEmailPrint