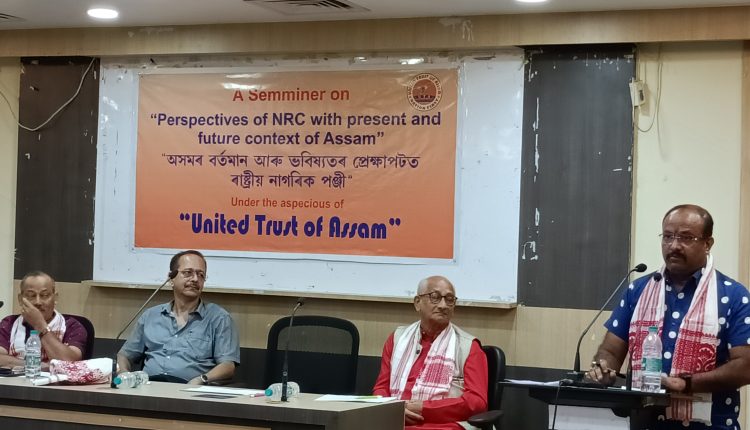 Guwahati, 3rd September: State level discussion organize at PWD Conversation Centre in Guwahati, different dignitaries attended the event from different nook and corner of the state, meanwhile they claims that the process of updating the NRC was started on 5th May 2005, highly expensive and Straineusly cumbersome process ended after a draft NRC was prepared on 31st August 2019 ,

After the draft copy of this excercise of NRC was released, obviously, it raised the all eyebrows of all who expected a clean process, and certain obvious questions inherent to the process, crept up. How much illegal foreigners are there in the state ? How this wrongful excercise can be helpful for the state of Assam ? Instead of solving the vested foreigners’ issue, the prepared NRC, seems to regularise a large dhunk of foreigners, who are notoriously included in the NRC It is pertinent here to mention that the so-called ‘Assam Agreement’ signed between AASU and GOl, was, in fact an apple of discord instead of being any good. When in rest of the country the NRC is based on the base year of 1951, but, here in Assam base year is 1971.

AASU and its Corroborating brotherly organisations had done this great harm to Assam’s demography and that too without any remorse of wrongdoings. Why we should bear the loads of infiltrations, systematically carried out by the anti india forces ? Why Assam should bear the load of Lakhs of infiltrators that happened between 1951 to 1971? At the time of Assam Agitation then CM Hiteswar Saikia used to say in public that there are nearly 30 lakhs of Bangladeshis, the then Home minister around 50 lakhs Bangladeshisin Assam.

Despite such wide acceptance of such 50 lakhs of Bangladeshis, even by the opposing dispensation of Assam Agitation, what a result delivered by this wrongful excercise of preparation of NRC ?? It is an insult to Assam Agitation and a deep stabbing in the living body of Assamese peoples. Mr. Hazela, has done rampant corruption and adopted all hide and seek criminal conspiracies to include millions of illegal nationals in the NRC. There cah not be another example of blatant illegality and worse, AAsU and its partners were celebrating on publication of draft NRC, which was infact a doomes day for the future of Assam. A beautiful state is on the verge of becoming a Kashmir like situation. Drajit Gupta had said that there is Voices were raised by concerned people and institutes against the corrupt practice of Mr Hazela, but, as it appears State or Central Government is keeping a deaf ear to it. Why? Question arises, whether all these excercises were conducted to give citizenship to undeserving thugs who entered the country with all ill intention and to capture power by vote ? Some R1600 crore is ill spent and thousands of government employees were harassed alone to allow a corrupt officer go scot free after doing all these criminal mesh. These money spent From the exchequer are public money and people mis using it with vested interest must pay the price.

United Trust of Assam highlights the infiltration in Assam:

From the cited data it is crystal clear that there Is a grave situation which need all out effort to redress, but, sorry state of affair is there is no serous awareness neither any effort to redress. Some facts and figure from the sensus of 1971 are mind boggling, it is stated here that from 1901 to 1951, the rise in population of state demography was 17 to 20%, most astounding figure comes in the rise of population of Assam in these 10 years, an increase to 34.98%. In 60 years from 1901 to 1961, the rate of rise in population in Assam was the highest among the country.

Keeping all these in mind, today, on 3rd of September 2022, at PWD Training & convention entre auditorium, UNITED TRUST OF ASSAM have organised a symposium on “NRC in the perspective of present and future”.Retired co-ordinator of NRC Mr. Hitesh Dev Sharmah, IAS, bhijit Sarma of Assam Public Works, noted Journalist Naba Thakuria spoke in details, The neeting was presided by Dwijen Barthakur.