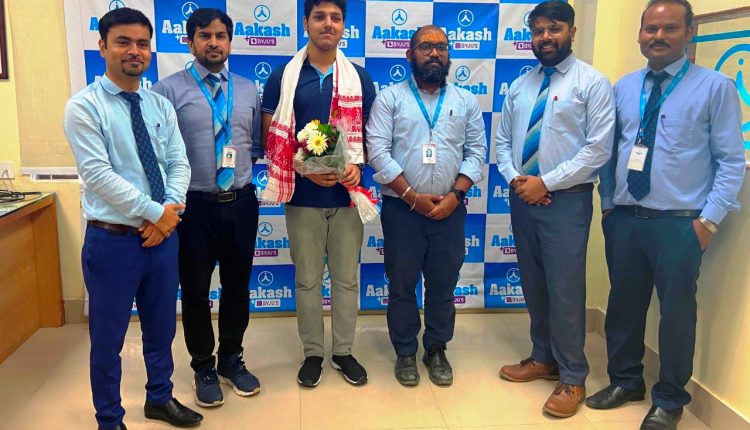 AZIR KHOBOR, GUWAHATI, SEPTEMBER 08, 2022 : Subrata Kumar Goswami, a student of Aakash BYJU’S from Guwahati has made the institute proud by becoming the Assam and North East topper by securing an impressive AIR 153 in the result of the prestigious National Entrance Examination (NEET) UG 2022 much to the elation of his parents and the entire staff of the Aakash BYJU’S. He has obtained 695 out of 720 in the prestigious medical entrance examination. The results were announced by the National Testing agency last evening.

The student joined Aakash BYJU’S in a two-year classroom programme to crack NEET, considered the world’s toughest entrance exam. He attributed his entry into the elite list of top percentiles in NEET to his efforts in understanding the concepts, and their strict adherence to their learning schedule. “I am grateful that Aakash BYJU’S has helped me with both. But for the content and coaching from the BYJU’S, I would not have grasped many concepts in different subjects in a short period of time,” he said.

Congratulating Subrata Kumar Goswami, Mr. Aakash Chaudhry, Managing Director, Aakash BYJU’S, said, “We congratulate Subrata Kumar Goswami for his exemplary feat. A total of 16 lakh plus students appeared for NEET 2022 from across the country. His achievement speaks volumes of his hard work and dedication as well as the support of his parents. We wish him all the best with his future endeavors.”

He added that during the pandemic-hit academic years, Aakash BYJU’S walked the extra mile to turn students into top percentile scorers in NEET. “We stepped up our digital presence to be always available for our students. We made study materials, and question banks accessible online. We conducted several virtual motivational sessions and seminars on exam preparation and time management skills. It is heartening to see our efforts paying off, as evident from the score sheets of our students, many of whom are well on their way to get admission in a top medical college to pursue higher studies of their choice.”

NEET is conducted annually by National Testing Agency as a qualifying test for students who wish to pursue undergraduate medical (MBBS), dental (BDS) and AYUSH (BAMS, BUMS, BHMS, etc.) courses in government and private institutions in India and also, for those intending to pursue primary medical qualification abroad.

With over 33 years of operational experience in the test preparatory industry, the company has a large number of selections in Medical & amp; Engineering Entrance Exams and several Foundation level Scholarship exams/Olympiads, a pan India network of 200+ Aakash Centers (including franchisee), and an annual student count of more than 250,000.