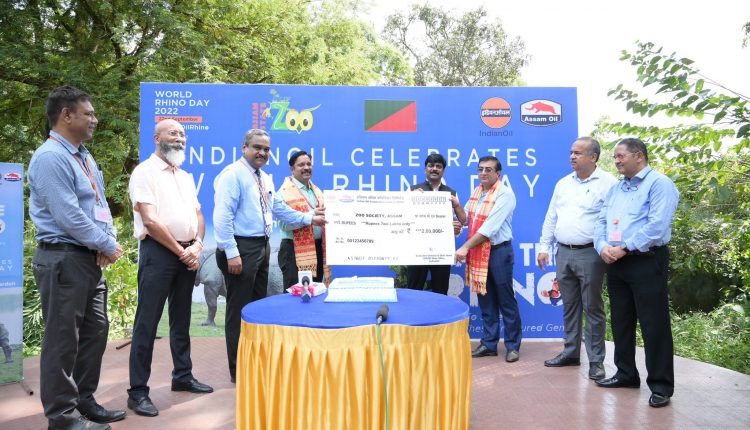 AZIR KHOBOR, 22nd SEPTEMBER 2022, GUWAHATI : Taking forward IndianOil’s Vision / Mission statement, ‘…to help enrich the quality of life of the community and preserve ecological balance and heritage through a strong environment conscience…’, IndianOil is undertaking several initiatives towards protecting the one – horned Rhino, categorized a ‘vulnerable’ as per Extinction Risk by WWF.

Assam has the highest density of rhinos in the world, but poaching and agricultural development have significantly reduced its population. However, its population has increased due to measures taken by the government and organizations like IndianOil.

Notably, IndianOil had adopted the one -horned rhino as its mascot, IndianOil Rhino, this month last year. The Great Indian One Horned Rhino is an exquisite combination of strength, power, and agility. More importantly, its identity is rooted in its Indianness, making it the perfect storyteller for brand IndianOil. This Rhino is also a critical cog in the ecology to which it belongs, and its continued well-being is crucial for the sustenance of the ecological chain.

Building on IndianOil’s brand positioning as ‘Truly Indian’, the IndianOil Rhino – the brand mascot of IndianOil – is helping the organization build a lifelong bond with the billion-plus Indians and herald a new era of customer excellence for IndianOil.

On the occasion of World Rhino Day, Mr. SM Vaidya, Chairman, IndianOil said, “IndianOil has successfully combined its responsibility towards environment & ecology, with its business offerings, meeting the energy needs of millions of people every day, across the country. We had launched the Rhino as our mascot in September last year that stands tall as IndianOil’s commitment to protecting India’s biodiversity. We are committed to raise awareness to protect this ecological jewel of India.”

As one of the flagship public sector enterprises of India, the Corporation recognizes protection of environment as a core commitment of its business. More recently, IndianOil has collaborated with the National Tiger Conservation Authority (NTCA) for the transcontinental relocation of ‘Cheetah’ in its historical range in India. The Corporation will contribute Rs.50.22 crore over five years for the project components, including Cheetah Introduction, Habitat Management & Protection, Eco Development, Staff Training and Veterinary Healthcare. The first Cheetahs, flown in from Namibia, were released in the Kuno National Park in Madhya Pradesh in the presence of Hon’ble Prime Minister Shri Narendra Modi on 17th September 2022.