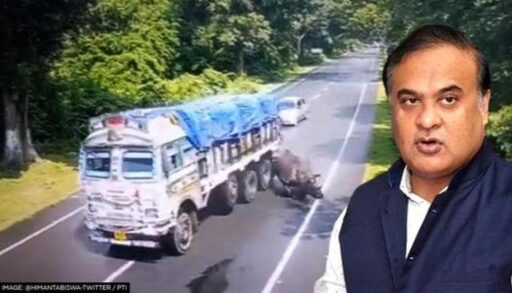 A one-horned rhinoceros was knocked down by a speeding truck in Assam’s Kaziranga National Park. The incident occurred in the Haldibari range of the park when the speeding vehicle from Jorhat towards Guwahati hit the rhino on National Highway (NH) 37.

The Incident was captured in the CCTV camera installed on the national highway and was shared by Assam Chief Minister Himanta Biswa Sarma on Twitter.

The CCTV video shows that after being hit by the speeding truck, the full-grown rhino was thrown off balance and looked disoriented. The impact was so powerful that the majestic animal was visibly shaken by shock and lost its balance before labouring into the forest, in the same direction it came from.

The Chief Minister informed that the rhino that got hit by a truck has survived, and the vehicle has been intercepted and fined. The truck bearing a West Bengal registration, that hit the rhino, was apprehended in Bokakhat, and a fine of Rs 9000 was imposed on the driver by the forest and traffic department of Golaghat district.

Rhinos are our special friends; we’ll not allow any infringement on their space.

In this unfortunate incident at Haldibari the Rhino survived; vehicle intercepted & fined. Meanwhile in our resolve to save animals at Kaziranga we’re working on a special 32-km elevated corridor. pic.twitter.com/z2aOPKgHsx

“Meanwhile in our resolve to save animals at Kaziranga we’re working on a special 32-km elevated corridor,” Sharma added in the tweet.

The decision to build an elevated corridor was taken in the Assam government’s recently concluded Cabinet meeting.

This is not the first incident where an animal was injured by a speeding vehicle in Kaziranga National Park. In June 2022 at least four animals including a leopard were killed after a vehicle struck them at NH 37. According to the forest officials, the collision also led to the death of three hog deer along with the leopard.

Kaziranga National Park is a paradise for 1641 rhinos and over 120 Royal Bengal tigers.