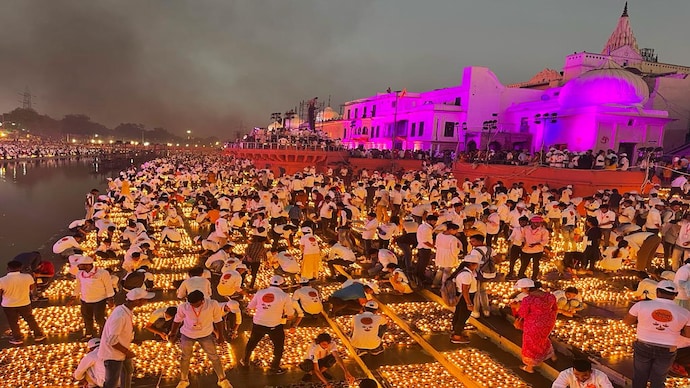 Uttar Pradesh, October 23rd:  Uttar Pradesh’s Ayodhya set a new Guinness World Record for lighting the maximum number of earthen lamps – over 15 lakh– on the banks of the Saryu as Prime Minister Narendra Modi launched the historic Deepotsav celebrations on Sunday, on the eve of the festival of Diwali.

Modi and chief minister Adityanath displayed the Guinness Record certificate on the occasion.

Beginning his speech with ‘Jai Shri Ram’, Modi addressed a gathering on the occasion of Deepotsav. “From the holy birthplace of Lord Ram, I pass on Diwali wishes to my countrymen,” Modi said.

Modi also said people have to learn as much as they can from Lord Ram.
“Lord Ram doesn’t leave anyone behind, doesn’t turn away from anyone,” Modi said.

Earlier, Modi offered prayers to Ram Lalla at Ram Janmbhoomi in Ayodhya. This is Modi’s first visit to Ayodhya after a “bhoomi pujan” for the construction of a Ram temple on August 5, 2020.

“I got the opportunity of Lord Ram’s darshan due to his blessings; happy that people across the world watching Deepotsav celebrations in Ayodhya,” Modi said.

Immediately after reaching Ayodhya for the Deepotsav celebrations, the PM went to the makeshift Ram temple and offered prayers to Ram Lalla. He lit an earthen lamp there and performed an “aarti”. Temple chief priest Acharya Satyendra Das applied vermillion on his forehead. Modi was also briefed by officials on the construction going on for a grand Ram temple at the site. Modi also performed the Rajyabhishek of the symbolic Bhagwan Ram in Ayodhya.

Five animated tableaux and 11 Ramlila tableaux showcasing dance forms from different states will also be presented during the Deepotsav.

“Deepotsav of Ayodhya started 6 years ago with the guidance and inspiration of PM Narendra Modi. This festival of UP became a festival of the country. Today, it is touching new heights of success,” Uttar Pradesh chief minister Yogi Adityanath on the occasion.