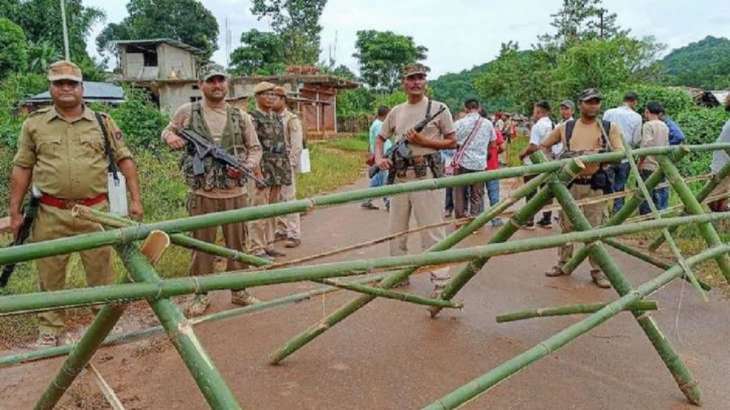 GUWAHATI, November 17: In the occassion of celebrating ‘Karbi Anglong Day 2022‘ this November, a concerning development along the Assam-Meghalaya inter-state border in the West Karbi Anglong district, a newly laid foundation stone of an Assam Government department was vandalised by alleged miscreants.

As per information, the foundation stone for the Inspection Building of Assam’s Forest Department was laid by Tuliram Ronghang, the Chief Executive Member of Karbi Anglong Autonomous Council earlier on November 12.

Interestingly, on the same day of the inauguration, Karbi Anglong Autonomous Council CEM Tuliram Ronghang stated during a joint parliamentary meeting of the Council that no amount of territory in the West Karbi Anglong district would be given to the bordering state Meghalaya.

Reportedly, some suspected miscreants from the other side of the inter-state border vandalised the foundation stone.

This incident comes days after the announcement that the second round of talks along with all the regional committees of Assam and Meghalaya will take place in the later part of this month. This second round of talks between delegations from both the states will be take forward the dialogue on the remaining areas of difference along the border. Already in the first round of talks, disputes in six areas have been resolved and an agreement was signed in March this year.

Talking to the media, Meghalaya Chief Minister Conrad Sangma had earlier stated, “I am hopeful that within this month of November, we should be able to have the first round of meetings with all the regional committees present, and hopefully we’ll be able to initiate the talks of the second phase.”

CM Sangma had also stated that various sub-committees formed for the purpose have already been coordinating and holding discussions, but the official talks will take place in the later month of November.

“It will be an endeavour to ensure that within the next few weeks, we will try to meet the regional committees and the chief ministers together to take the discussion forward,” CM Sangma stated earlier on October 28 during an interaction with the media.