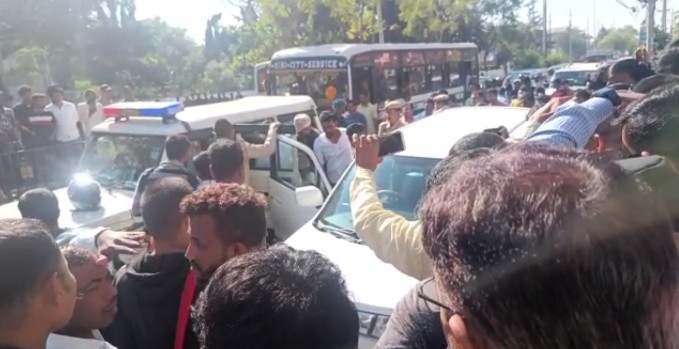 Two miscreants took away Rs. 2.5 lakh after killing the Businessman

By Ranbir Hanse On Nov 21, 2022
Share FacebookTwitterWhatsAppEmailPrint
Guwahati, November 21: A shocking incident occurs at Punjabari area in Guwahati, Ranjit Bora a Purabi diary Distributor by profession shot dead by two unknown robbers in day light while parking his car. Ranjit Bora was carrying a cash of Rs. 2.5 Lakh to deposit in bank as he often goes to deposit his money at ICICI Bank.

After the firing, he was taken to Guwahati Medical College and Hospital (GMCH) by Dispur Police, where he was declared dead at 12:44 PM.

As per the report Ranjit Bora was 58 years old and a resident of Kahilipara. The two miscreants came by bike having pistol in their hand, the robber even took away Rs.2.5 Lakh , as of now the robber are not identified yet, as per sources CCTV camera footage is received by cops future investigation is on.
Share FacebookTwitterWhatsAppEmailPrint