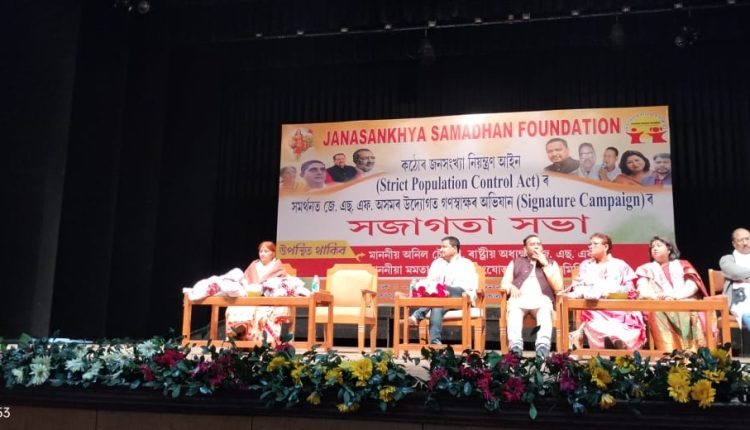 AZIR KHOBOR, GUWAHATI, 22ND JANUARY, 2023 : A “Signature Campaign Awareness Meeting” was held at Sri Sri Madhavdev International Auditorium, Kalakshetra, Panjabari, Guwahati today, organized by Janasankhya Samadhan Foundation (JSF) Assam, and chaired by JSF Assam Pradesh President Sri Pankaj Talukdar. JSF National President Shri Anil Chowdhury and National Coordinator Smt. Mamata Sehgal delivered keynote addresses at the meeting. Addressing National Secretaries General Shri Krishna Murari and Shri Harendra Bora, conscious citizens of Guwahati city, JSF Presidents of North Eastern States, journalists and workers from various districts of Assam, the National President said, “Security of livelihood of future generations and unity of the country -There is no alternative to a strict population control law in the country to A population law gives the government a right to control the population of a country – a right that the governments of European countries as well as Japan, China, Australia, New Zealand etc. have. India is now behind China in terms of population size. China has a population density of 153 people per square km, compared to 470 in India.

China is three times larger than India. Our country is one of the most populous countries in the world. Population explosion is like an atomic bomb. Without strict legal controls, population explosion leads to sharp increases in unemployment, price increases, environmental destruction, encroachment and eventually civil war. We should learn from the temporary European country of Serbia and the African country of Sudan. The government should not be afraid of losing power; They are demanding strict population control laws in the interest of the state. The majority of the people have also understood. The current time is right time for a population control law. The National Speaker reiterated that the page writers have the power to go to the villages and make the last person in the society aware of the need for the Population Control Act. Therefore, the Hon’ble National President of JSF has called the page linkers involved in the mass signature campaign as the Brahmastra of Janasankhya Samadhan Foundation.