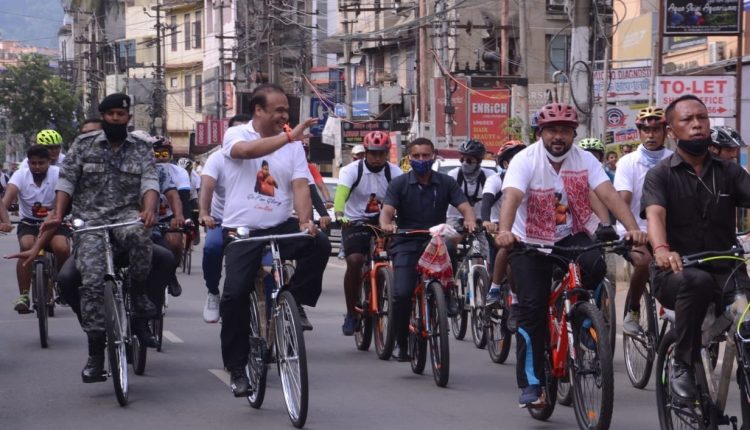 GUWAHATI,July 21: One of the most active, Chief Minister of Assam Dr. Himanta Biswa Sarma along with member’s of Ligislative Assembly including the opposition parties leaders takes part in the ‘Cycle rally’ in early morning on Wednesday from ‘Dispur last gate to Nehru stadium at Ullubari’.

The cycle rally was flag off by CM Dr. Himanta Biswa Sarma this morning at 9:30 am. Chief Minister and his member’s are seen chanting the slogan ”Go for glory” wearing ‘white T-shirts with printed an Image of the Boxer Lovlina Borgohain . The cycle rally was organised to cheers and to motivate Assam’s daughter Lovlina Borgohain,who is a first Assam female boxer, representing India,where she has arrived in Japan’s capital to participate in TOKYO OLYMPICS 2020,which is beginning from July 23rd. 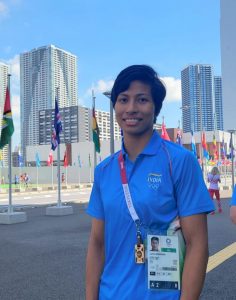 A ‘congratulatory’ proposal was placed in the House by parliamentary affairs minister Pijush Hazarika and both Opposition and ruling party legislators welcomed the proposal and resolved to support the lone representative from Assam at the Tokyo Olympics 2020, which had to be deferred by a year because of the  covid-19 pandemic.

“Born in a village in Sarupathar constituency in Golaghat district on October 2, 1997, Lovlina has proved her credentials in both national and international events in boxing. Now as she represents India at the Tokyo Olympics for the first time, we anticipate she will bring laurels to the country and Assam,” Hazarika said.

Earlier, the minister further informed that Sarupathar MLA Biswajit Phukan along with a few organisers in association with the sports directorate would organise a cycle rally from Dispur Last Gate to Nehru Stadium in Ulubari on Wednesday morning with a slogan “Go for glory, Lovlina”.

Leader of the Opposition in the Assembly, Debabrata Saikia welcomed the proposal to support the state boxer and also suggested whether she could be made a brand ambassador in future.

Lovlina will begin her Olympic campaign in the women’s 69kg welterweight category on July 24.

Last month, the 23-year-old became the first female pugilist from Assam to qualify for the Tokyo Olympics.

Addressing the Assembly, the chief minister had on Monday said that the House would send a goodwill message to Lovlina as she gears up for her Olympic campaign

Setting the tone for a healthy, competitive culture for sports, the Assam government had on Monday decided to provide jobs to National Games medalists, along with Olympics, Asian and Commonwealth Games medalists in accordance with their eligibility and qualification.

Besides, the government also announced to provide sports pension to all former medal winners of the state in national-level Olympic recognised disciplines.

Dr.Himanta Biswa Sarma addressing the media said: His government will provide jobs to those ATHLETES participating in Asian games, Olympics or other national game’s medalists in accordance with their eligibility and qualification.

Dr Sarma added: that talents are abundant in Assam, just need to be chosen and in different districts of Assam an stadiums will be prepared for future training and preparedness of Athletics for sports compitition.