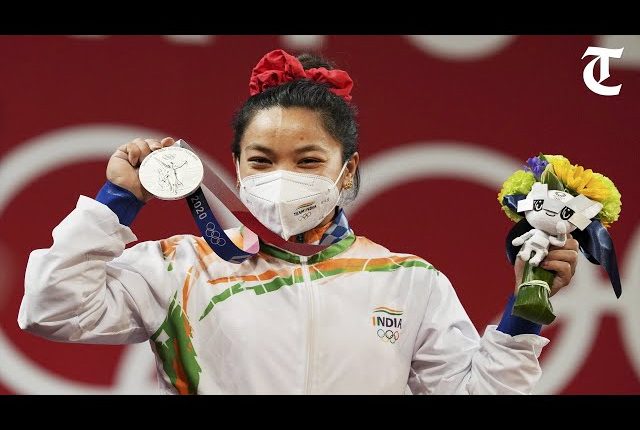 GUWAHATI,july 25: A 26 years old athlete from Northeast india, Mirabai Chanu on Saturday created history by winning India’s first medal of the Tokyo Olympics when she clinched silver in women’s 49kg weightlifting event. Chanu thus becomes the second ever Indian female weightlifter after Karnam Malleswari to win an Olympic weightlifting medal. Chanu took the silver lifting a total 202 kg – 87 kg in snatch and 115 kg in clean and jerk. She successfully lifted 84 kg and 87 kg in her first two attempts in snatch category but failed in her final in which she targeted 89 kg. Similar story followed In the clean and jerk section that saw her lifting 110 kg and 115 kg in the first two attempts.

However, in her final, she couldn’t lift 117 kg but by then, she had already assured herself of a silver. Chanu broke down after realising she has secured a medal and hugged her coach in jubilation. And later did a little a dance after assuring herself of a silver.

In an exclusive interview with indian media’s,Chanu said, ‘I cannot explain in words how happy I’m feeling. I am feeling very proud, it’s our second medal in weightlifting. I want to thank the federation, my coach, family and all support system,” the 26-year-old said in an exclusive chat.

In an interview with NDTV, Chanu also said that the first thing she wanted to do was eat pizza. ‘First of all, I will go and have a pizza. It has been a long time since I ate it. I will eat a lot today.”

We never want @mirabai_chanu to wait to eat again so we’re treating her to FREE Domino’s pizza for life! #Pizzas For Life” they wrote on Twitter