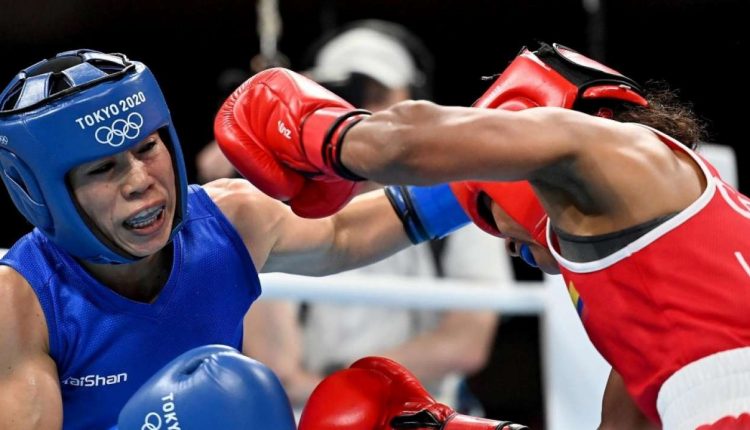 TOKYO, july 29: A six-times world champion Mary Kom’s bid to win a second Olympic medal ended in the pre-quarters of Tokyo Olympics on Thursday. The London Olympics bronze medalist lost to 3rd seed Ingrit Valencia of Colombia via split decision in a closely-contest Round of 16 match in the Women’s Flyweight category. Earlier this week, Mary Kom came up with a dominant display of boxing in her opening round on Sunday.

She defeated Dominican Republic’s Miguelina Hernandez Garcia 4-1.ary showcased all her experience by coming up with a tactical masterclass. The 38-year-old, a mother of four, started on a cautious note, swaying away from punches and gauging her opponent, who is a a Pan American Games bronze-medallist.

However, in the last 3 minutes, Mary was aggression, personified. She landed scoring punches at will to jolt Migueline and take the match comfortably. Mary Kom has been there and conquered it all, however, the ace boxer failed to deliver once again at the showpiece event. The 2012-bronze winning boxer was hoping to go the distance this time but unfortunately the 38-year old did not have a fairytale ending.

Mary lost the Round of 16 bout by the barest of margins as it was a 3-2 decision in favour of Colombia’s Ingrit. In fact, it was Ingrit’s first win in 3 attempts against the Indian boxer.

Mary Kom proved why she is one of the most-loved athletes in the country when she came up with a reaction that symbolised her graceful acceptance of the defeat at the Kokugikan Arena. In probably her last Olympic appearance, the mother of four gave it her all, testing the Rio Olympics bronze medalist to the limits.

London @Olympics 🥉medalist @MangteC put up a memorable fight but it wasn’t to be, fell short as she goes down 2-3 against Rio #Olympics 🥉medalist 🇨🇴's Ingrit V in Round of 16 match of @Tokyo2020 . #RingKeBaazigar#boxing#Tokyo2020#Cheer4India#TeamIndia pic.twitter.com/d5RKpusKN6

COMPLETE LOCKDOWN HAS ANNOUNCED IN ‘KERALA’ ON SATURDAY AND SUNDAY