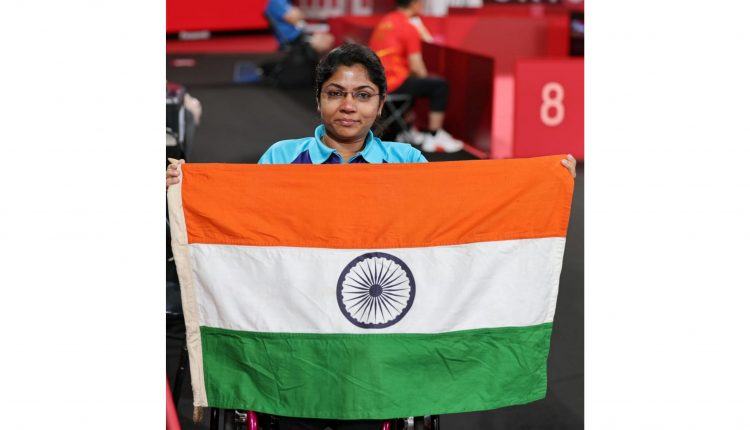 Tokyo Paralympic 2020: Bhavina made history for the first in table tennis player to win a Silver medal from India

New Delhi, August 29: On sunday, August 29 india’s Bhavinaben Patel has scripted history, becoming only the 2nd Indian woman to win a Paralympic medal. The 34-year-old bagged the silver medal in women’s table tennis C4 category after losing to World No. 1 Zhou Ying of China in the gold medal match at the Tokyo Paralympics.

Bhavinaben Patel, featuring in her first-ever Paralympic Games, was at excellent, stunning big names in the field of sport. However, Zhou Ying rallied to her 6th Gold medal in Paralympics with a dominant win over the Indian in the final.

Bhavina made the world sit up and take notice of her skills with a superb campaign at the Paralympics. Known for meditating during her time-outs, Bhavina was at it again in the gold medal match. She began well, going toe-to-toe with Zhou Ying but the Chinese paddler, a veteran of the sport, showed her class taking the first game in just 6 minutes. The end came soon for the Indian paddler who needed a timeout in the final game to try and trouble the Chinese but it wasn’t the case on Sunday.

THE MOMENT 💜Wonderful show of skill and mental resilience throughout her #Paralympics campaign.

Bhavina Patel can be extremely proud of her achievement in Tokyo Paralympics. The 34-year-old lost only to the World No.1 throughout her competition. Bhavina had lost to Zhou Ying in the opening match of the group stages only to make a stunning comeback.

Bhavina clinched a gutsy win over world number 3 Zhang Miao of China in the semi-final, pulling off another upset at the Paralympics in the women’s singles Class 4 competition. She had defeated world number 2 Borislava Peric Rankovic of Serbia 11-5, 11-6, 11-7 in straight games in the quarter-finals.

In the round of 16, Bhavina has got the better of Joyce de Oliveira of Brazil 12-10 13-11, 11-6 to become the first Indian table tennis player to reach the quarterfinals in the Paralympics