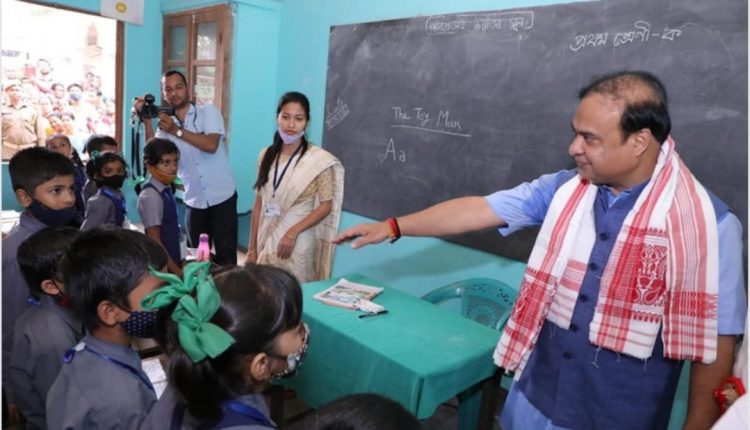 Assam CM Dr. Sarma announces the govt to introduce a ‘Hybrid method’ of Teaching in schools

Guwahati, May 13: On Wednesday, Assam Chief Minister Himanta Biswa Sarma announced that the state government is contemplating introducing a ‘hybrid method’ of teaching in schools that will feature a ‘mixture’ of both English and Assamese as mediums of instruction in schools.

The Assam CM also interacted with the students of two districts in the Sipajhar of Darrang district, while kickstarting this year’s ‘Gunotsav’, which is an exercise to assess schools’ performance.

“The state government is contemplating to introduce a hybrid method of teaching with a mixture of both Assamese and English languages, aiming at widening the ambit of job opportunities for the students,” said CM Himanta Biswa Sarma, according to an official statement.

The Assam CM says, that the state government is also thinking of rotational transfer of teachers within a district in order to provide teachers serving in remote areas an opportunity to teach at relatively easily accessible places.
He added that the teaching community will have to volunteer in a cooperative manner for the realisation of this plan by the government.

The ‘Gunotsav 2022’ will take place in three phases across all districts, concluding on June 4. Speaking further, Assam CM Himanta Biswa Sarma said that ‘Gunotsav’ is an opportunity to know about educational institutions’ current condition and the challenges faced by them.
“This also helps in planning to address all such issues in a holistic manner,” he stated, emphasising the importance of holding the annual ‘Gunotsov’ exercise without interruption and requesting that the Education Department make the necessary efforts to ensure this.
First held in 2017, ‘Gunotsav’ has already been conducted twice, covering all 33 districts.
The state CM added that the education system has been severely hit by the pandemic and efforts are now being made to get it back to its prior condition.
Share FacebookTwitterWhatsAppEmailPrint