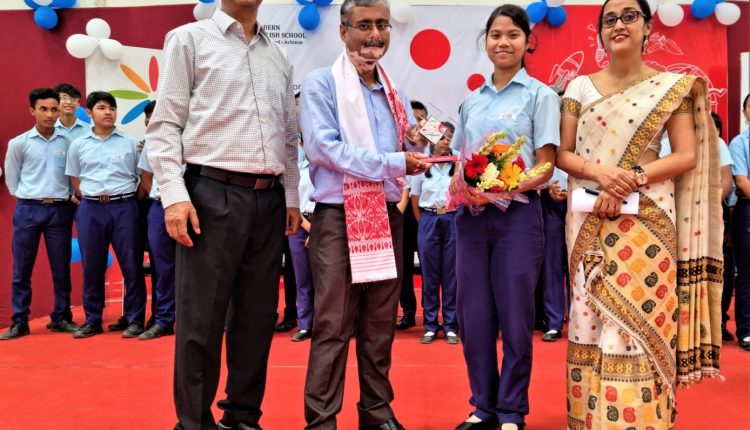 AZIR KHOBOR, GUWAHATI, JUNE 11, 2022: With great joy and vigour, Modern English School, Guwahati, Assam on Friday, June 10, celebrated its 39th Pre-Foundation Day. To mark the occasion, the school organised a spate of events in which students of all age groups participated with much enthusiasm.

The school also organised the first Kuladhar Das Academic Symposium in the memory of the founder Late Kuladhar Das. Under this initiative, students of the school presented their research papers in the presence of the guest of honour Mr. Mayur Bora, a renowned Indian writer, critic, and public speaker from Assam. Arunabh Das and Harshita Talukdar of Class 9, Sourin Bhattacharjee and Violet Barman of Class 10, and Anamika Ghosh and Niharika Das of Class 12 were among the selected students who presented their research papers on the topics of Fundamental Rights and Humane Values and Dignity.

Mr. Bora also inaugurated the 13th issue of two Assamese handwritten magazines curated by the students of class 9 and 10. Modern English School Magazine Modernizer issuesfor the year 2020-21 and 2021-22 were also released on this occasion.

Furthermore, Art & Craft, Photography, T-shirts, and Face painting were also organised with the aim to promote and stimulate amateur photographers’ and artists’ interest in the creative field. The exhibition and creative competitions were judged by Mr. Atul Ch. Baruah, Retired Professor of Assam Government Fine Arts College Guwahati. The day concluded with solo songs and the traditional foot-tapping Bihu performance.

Modern English School was founded by Late Kuladhar Das in 1984. The journey started on the 12th of June 1984 with a small group of eleven students and six teachers. Initially, the school was only functional from classes from I to VI. But in the past 39 years, it sprouted at an unprecedented speed. Today, the school has a junior wing- Modern Academy, and Senior wings from I-XII, with over 1200 students, 65+ teachers, and a campus of more than 2 acres.