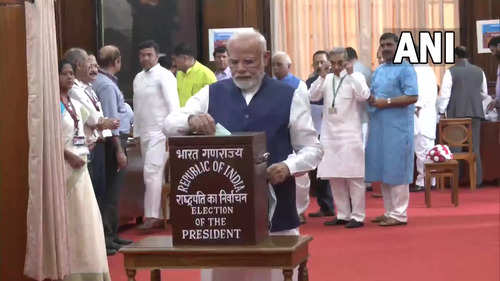 New Delhi, July 18: Voting for the Electing the new President of India begins on Monday in Parliament promises. Prime Minister Narendra Modi was among the early MPs to cast his vote at the polling booth inside the Parliament premises.

Talking to IANS Parliamentary Affairs Minister Pralhad Joshi said, “The NDA candidate Draupadi Murmu is going to win this election with a record vote and with a huge margin.”

Murmu is the NDA candidate, who is contesting against Yashwant Sinha, supported by the Opposition parties. The Rajya Sabha’s Secretary General is the Returning Officer for this election.

Former Prime Minister of India and Congress MP Manmohan Singh, after casting his vote in the election being held for the post of President of India in Parliament pic.twitter.com/pm4Bihza1Z