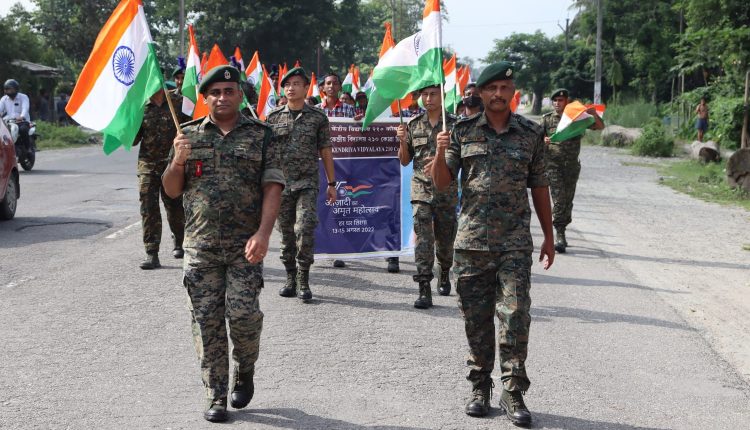 Nagaon, August 7: As part of the ongoing ‘Har Ghar Tiranga‘ campaign, Central Reserve Police Force (CRPF) personnel, along with police, took out a ‘ Tiranga Yatra ‘ to spread awareness among people.

The rally witnessed the participation of about 150 military personnel.
Shiv Shankar Upadhyay, CRPF commandant, said, “‘Har Ghar Tiranga’ is a campaign to mark the 75th year of India’s independence. I request everyone to turn the ‘Har Ghar Tiranga’ campaign into a mass movement by hoisting or displaying the national flag at their homes between August 13-15.”
He further said that this campaign is launched to spread awareness among citizens.

Local police said, “This yatra is initiated to celebrate and commemorate 75 years of Independence.”
‘Har Ghar Tiranga’ is a campaign under the aegis of Azadi Ka Amrit Mahotsav to encourage people to bring the Tiranga home and to hoist it to mark the 75th year of India’s independence.
Azadi Ka Amrit Mahotsav is an initiative of the Government of India to celebrate and commemorate 75 years of independence and the glorious history of India’s people, culture and achievements.
The program envisages inspiring Indians everywhere to hoist the national flag at their home. The aim of the program is to make the relationship with the national flag a more personal one rather than just keeping it formal or institutional.
The idea behind the initiative is to invoke the feeling of patriotism in the hearts of the people and promote awareness about the tri-colour. (ANI)