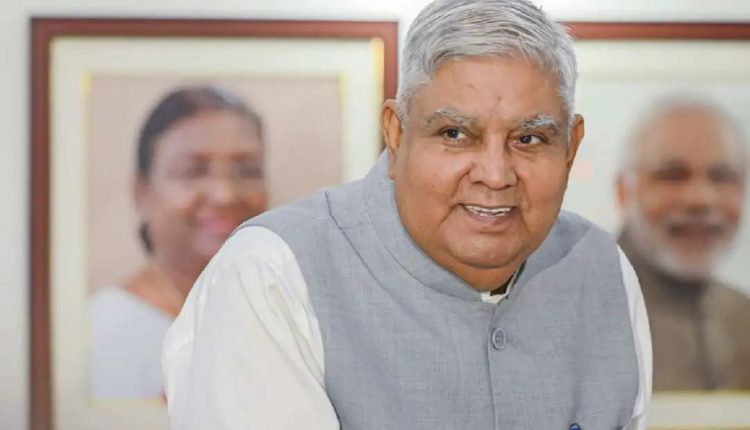 At the venue, Dhankhar greeted several dignitaries before taking the oath of office. He was also seen holding a brief conversation with former President Ram Nath Kovind.

He began his day by visiting Raj Ghat, the memorial of Mahatma Gandhi.

“Felt blessed, inspired and motivated to be ever in service of Bharat in serene sublimity of Raj Ghat while paying respects to Pujya Bapu,” Dhankhar tweeted.

Who is Jagdeep Dhankhar?

Jagdeep Dhankhar (born 18 May 1951) is an Indian politician and lawyer, who is serving as the 14th and current Vice President of India from 11 August 2022. Prior this position he served as the Governor of West Bengal. He also held office as the Union Minister for Parliamentary Affairs under the Chandra Shekhar ministry in 1990. He is a member of the Bharatiya Janata Party. He has also been a member of Janata Dal and Congress party in the past.

Born in a small village in Jhunjhunu in the State of Rajasthan in a Hindu Jat family. He completed his school education from Sainik School, Chittorgarh and then graduated in B.Sc and LLB from the University of Rajasthan.

Dhankhar enrolled with the Bar Council of Rajasthan as an Advocate in 1979. He was designated as Senior Advocate by the High Court of Judicature for Rajasthan in 1990, and was the senior-most designated Senior Advocate of the state till taking the oath as Governor on 30 July 2019.

Since 1990, Dhankhar had been practicing primarily in the Supreme Court of India. He has appeared in various High Courts of India.He is a former President of Rajasthan High Court Bar Association.