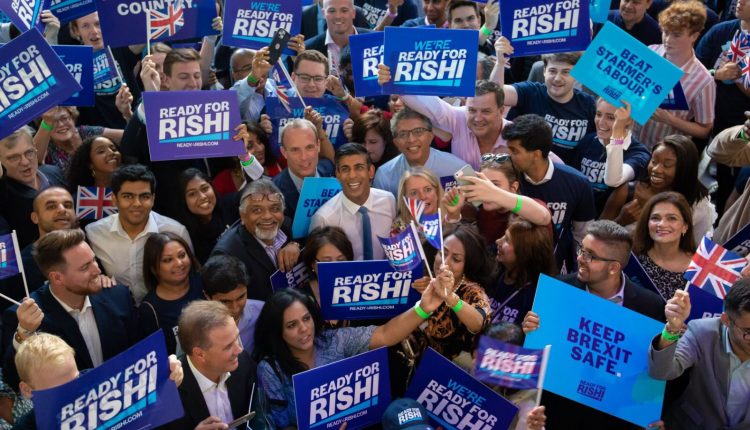 The 42-year-old former chancellor, while declaring his candidacy, said he wanted to "fix economy

England, October 24: Rishi Sunak has been elected the leader of the Conservative Party on Monday and is all set to become the next Prime Minister of Britain.

Rishi Sunak of Indian origin, who lost to Liz Truss in the race for the post of Prime Minister in September, has become the strongest contender in the race to become PM this time.

After former Prime Minister Boris Johnson was out of the race, now Sunak’s prime ministerial claim has been confirmed.

The former UK chancellor formally declared his candidacy to contest the Conservative Party leadership election on Sunday to replace Liz Truss as British Prime Minister and “fix the economy”. The chances of a Diwali victory for Sunak seems brighter as his former boss Johnson stepped saying it was “simply not the right time” for his comeback.

Sunak’s formal entry into the race is being widely pitched as one of the most remarkable political comebacks in British politics. The 42-year-old former chancellor, while declaring his candidacy, said he wanted to “fix economy, unite party and deliver for the country.” Sunak had a solid lead with a 100-MPs threshold to get shortlisted for the 14:00 local time Monday deadline, reported news agency PTI.

Sunak’s victory turned out to be a remarkable turnaround in political fortunes for the former finance minister, who lost out to outgoing Prime Minister Liz Truss just last month. His popularity among party colleagues did not manage to render him wider Tory membership vote.

“I am asking you for the opportunity to help fix our problems,” said Sunak, in his latest campaign pitch, with reference to the economic turmoil he would be inheriting if he does go on to succeed Truss following a disastrous tax-cutting mini-budget last month.

“The United Kingdom is a great country but we face a profound economic crisis. That’s why I am standing to be leader of the Conservative Party and your next Prime Minister,” he said, promising “integrity, professionalism and accountability” at every level of the government that he would lead and to “work day in and day out” to get the job done.

Sunak is born to an Indian-origin general practitioner father Yashvir and pharmacist mother Usha. He had spoken extensively of his migrant roots during the last campaign citing references to making history by lighting Diwali diyas at 11 Downing Street as the first Indian-origin Chancellor of the Exchequer.

Liz resigned as the Prime Minister Of UK after just 45 days of taking over following economic turmoil and the resignation of two key ministers.