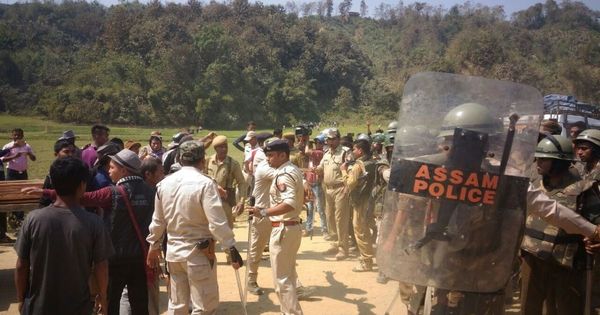 GUWAHATI,july 26: A day after the the meeting held in shilong in presence of H’norable Home minister Amit Shah on 25 july along with all the Chief Minister of Northeast india, to resolve the borders disputes between Assam, Nagaland, Meghalaya, Mizoram and the likes,which had been a long issues since the creation of the State of Mizoram on 20 February 1987, and other states as well.

On Monday 26 july a massive firing broke out between Mizoram and Assam police which were deployed at the border. the incident of firing between Assam Police and Mizoram miscreants, 6 Assam Police personnel have been died and 65 people have been injured. Of these, 45 police personnel are being taken to the Silchar Medical College Hospital (SMCH).

After killing 5 Assam police personnel and injuring many , this is how Mizoram police and goons are celebrating.- sad and horrific pic.twitter.com/fBwvGIOQWr

Amongst the injured include Cachar Superintendent of Police IPS Vaibhav C Nimbalkar and Dholai’s police in-charge.

Due to the border dispute between the two sides in Lailapur area of ​​Cachar district, the Chief Minister of Assam also wishes to visit the capital Aizawl for discussion if needed. On his official Twitter handle, he wrote that I have just spoken to the Chief Minister of Mizoram, Zoramthanga. “I have reiterated that Assam will maintain the status quo and peace within the borders of our state.I have expressed my desire to visit Aizawl and discuss these issues if required”. Responding to this, Mizoram Chief Minister Zoramthanga said that as discussed, I kindly request that the Assam Police be directed to withdraw from Vairengte for the safety of the citizens. Earlier, a Twitter war broke out between the two Chief Ministers.

Honble ⁦@ZoramthangaCM⁩ ji , Kolasib ( Mizoram) SP is asking us to withdraw from our post until then their civilians won't listen nor stop violence. How can we run government in such circumstances? Hope you will intervene at earliest ⁦@AmitShah⁩ ⁦@PMOIndia⁩ pic.twitter.com/72CWWiJGf3 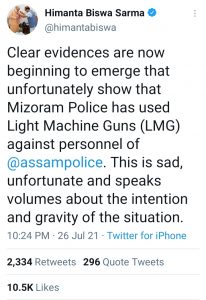 Both the Chief Ministers had also tagged their tweets to Prime Minister Narendra Modi and Home Minister Amit Shah. Meanwhile, the State Congress strongly condemned the firing on the Assam State Police personnel on the Mizoram-Assam border. The party’s media department chairperson Babita Sharma has expressed serious concern over the injuries to the Cachar SP. We condemn the attack.

Innoncent couple on their way back to Mizoram via Cachar manhandled and ransacked by thugs and goons.

On the other hand, Assam’s national level human rights and social activist Dr. Dibyajyoti Saikia has strongly condemned the firing on the Assam State Policemen on the Assam and Mizoram border. Expressing his deepest condolences to the families of the martyred policemen, he wished Cachar Superintendent of Police Vaibhav C Nimbalkar for a speedy recovery. 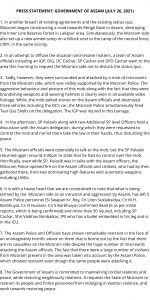