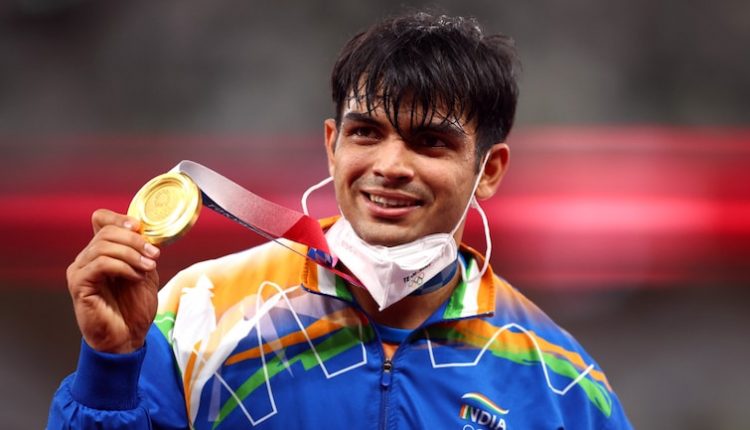 What is the Next target of ‘Gold medalist’ Neeraj Chopra?

Haryana, Aug 08: A 23-year-old Neeraj Chopra who hails from ‘panipat’ District of Haryana wrote history on 07 August by winning first Gold medal in Tokyo Olympics.In India it is very less. Only twice in singles event. Neeraj Chopra is the second Indian to wins. He created history by winning the gold medal in javelin throw at the Tokyo Olympics-2020. In his very first Olympics, Neeraj fulfilled that dream which good players could not fulfill. Neeraj knows what it means but he doesn’t want to stop there. Certainly he would like to defend his title at the Olympic Games in Paris and for that he knows what to do. So Neeraj has set his next target. He has said that his next goal is to throw the 90m javelin in the upcoming competitions.

Neeraj, India’s second individual gold medalist in the Olympics, was trying to break the Games record (90.57m) on Saturday itself but he could not reach there. Chopra said after his historic performance, ‘Javelin throw is a technical event and a lot depends on the form of the day. So my next target is to cover a distance of 90 metres. I was only focusing on the Olympics this year. Now that I have won the gold medal, I will make plans for future competitions. After returning to India, I will try to get visas from abroad to participate in international competitions.

Chopra had said after withdrawing from the Gateshead Diamond League on July 13 that he could take part in the remaining stages of the top-level one-day series after the Olympics. In addition to the Lausanne (26 August) and Paris (28 August) stages, the javelin throw is also included in the final to be held in Zurich on 9 September. 23-year-old Neeraj, a resident of Khandra village in Haryana’s Panipat, said that he was not under any kind of pressure and was doing the same thing as he does during other international competitions.

He said, ‘There was no pressure and I was participating in it (Olympics) like any other event. It was like I have competed against these athletes before and there is nothing to worry about. This enabled me to focus on my performance. It helped me win the gold medal. Yes, I was thinking that India has not won an athletics medal till now but once I got the spear in my hand these things did not come to my mind. ‘

Chopra had competed in three international events before the Olympics, but only one featured top athletes. He said, ‘The most important thing is that I got a chance to participate in international competitions before the Olympics. I was looking forward to it. I asked TOPS, Sports Authority of India (SAI) and Athletics Federation of India (AFI) to arrange some competitions. He did this because of which I am here today. I am grateful to SAI, AFI and TOPS for all the facilities that I have got. ‘

Asked how he managed to throw the javelin for a long distance in his first two attempts, Chopra said, ‘If the first throw goes well, it takes the pressure off. This happened. The second throw was also very good. As soon as I dropped the spear on both occasions, I knew it would go a long way. This puts pressure on other athletes. ‘

German legend and medal contender Johannes Vetter could not do well. The waiters were out after the first three attempts and finished ninth overall. About his friend and medal contender Johannes Vetter of Germany, Chopra said, ‘He was struggling. I don’t know if it was because of pressure or it was because of participating in too many competitions. He was not in his rhythm.

Chopra also credited his success to his childhood coach Jaiveer Choudhary. It was Jaiveer who asked him to join the javelin throw at the Shivaji Stadium in Panipat. He said, ‘I started with Jaiveer. He helped me a lot when I didn’t know anything about javelin throw. He is now training in the national camp. He is extremely dedicated. My core technique improved a lot after practicing with Jaiveer. ‘