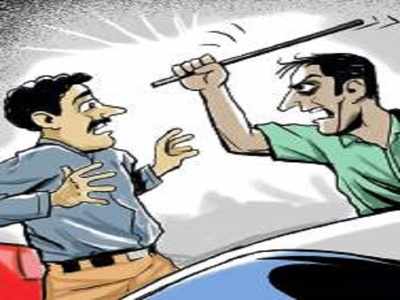 Shocking incident: An angry student attacked his male teacher with an iron rod while attending lecture in Delhi

New Delhi, September 20: A horrific incident has come to light from Delhi where an angry Class 11 student attacked his male teacher after being asked to sit properly.

As per the reports inform that the angry student was attending a lecture where the teacher asked him to sit in a proper manner in the class. According to a report by TOI, the anguished student picked up an iron rod and attacked the teacher. The report ad up that the incident took place in outer Delhi’s Ranhola on Saturday.

As soon as the incident came to light, Police oscillate into action and began a probe into the matter. The report states that the 21-year-old student had failed twice and was repeating Class 11. The incident was reported from a Government Boys Senior Secondary School. As per details by the cops, the male teacher was attacked by the accused during the lecture. Rajasthan Shocker: 54-Year-Old Teacher Brutally Thrashed, Robbed at Gunpoint Inside Public Toilet in Jaipur .

According to the TOI report, the accused student has been identified as 21-year-old Lalit. He was later arrested and a case under Section 308 (Attempt to commit culpable homicide) of the IPC has been registered.