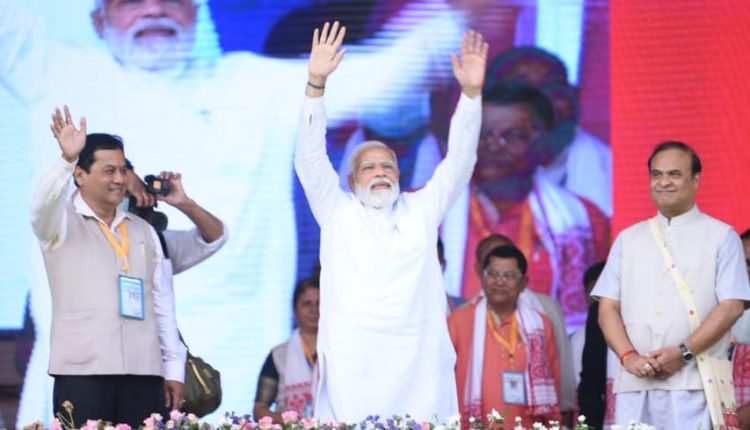 By Ranbir Hanse On Apr 28, 2022
Share FacebookTwitterWhatsAppEmailPrint
Dibrugarh, April 28, 2022: The Union Minister Shri Sarbananda Sonowal attended PM Shri Narendra Modi’s massive rally in Dibrugarh today which marked a new era
for healthcare in the state. In the program, the Hon’ble Prime Minister inaugurated seven Cancer Hospitals in the state and laid the foundation
stone of seven Cancer Hospitals. The hospitals are set up under the Assam Cancer Care Foundation, a joint venture of Government of Assam and Tata
Trusts which is executing a project to build South Asia’s largest affordable
cancer care network with 17 Cancer care hospitals spread across the state.
Under the Phase 1 of the project, out of 10 hospitals, the construction of seven hospitals have been completed while three hospitals are at various
level of construction. Phase 2 of the project will witness the construction of seven new cancer hospitals.The Hon’ble Prime Minister dedicated to the nation seven cancer hospitals
completed under phase 1 of the project. These cancer Hospitals are built at Dibrugarh, Kokrajhar, Barpeta, Darrang, Tezpur, Lakhimpur, and Jorhat. The Prime Minister also laid the foundation stone of seven new cancer hospitals
at Dhubri, Nalbari, Goalpara, Nagaon, Sivasagar, Tinsukia and Golaghat to
be constructed under phase 2 of the project.
Speaking on the occasion, Union Minister Shri Sarbananda Sonowal said.

region and extended his heartfelt thanks to the Hon’ble PM for inaugurating
seven Cancer Hospitals and laying the foundation stone of seven Cancer
Hospitals across Assam.
“In the seven years under the leadership of Hon’ble PM Shri Narendra Modi ji,
India has witnessed huge transformations and is becoming one of the most
powerful nations of the world. The respect PM Shri Narendra Modi ji has given
to the North East is unprecedented in the history of the nation. North East is
the Asthalakshmi and now becoming the growth engine of India,” the Union
Minister said.
The leadership of Hon’ble PM Shri Narendra Modi ji has brought permanent
peace and rapid progress in the North East, transforming our connectivity via road, rail, air and waterways. It has given us the opportunity to connect with the world and grow. I thank the dynamic CM of Assam Dr Himanta
Biswa Sarma for bringing affordable cancer care to the people of Assam and
North East and extend my gratitude to TATA Trust Chairman Shri Ratan Tata
ji and the Tata Trust family for their support in this noble initiative,” the
Union Minister added.
He concluded,”the cancer Hospitals in Assam will not only be a blessing for the
people of the region but for the entire SE Asia. Under the Act East policy, Assam
will emerge as the medical hub of SE Asia.”