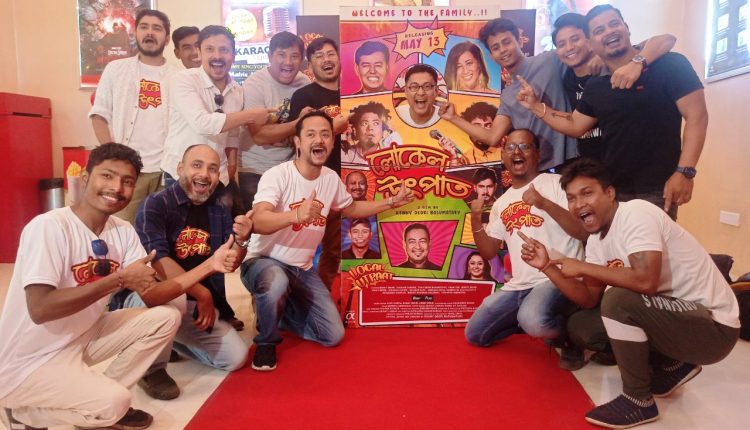 AZIR KHOBOR, Guwahati, May 12, 2022: Local Utpaat, the new comedy film from the Local Kung Fu and Heavy Budget team, had an astounding response at its premiere show in Guwahati on May 12.
The film’s marketing slogan was “Sobigriholoi ahibo / Petor bixor tablet anibo / May 13 tareekhe / Local Utpaat hobo (Come to the theatres, bring stomach ache tablets, on May 13 as we unleash Local Utpaat).
The team completely delivered on that promise as the audience was laughing throughout the premiere, with among the loudest laughs coming from a scene involving an iPhone, a horror-comedy moment, and the climax, which was a laugh riot of comedy and action.
Bibhash Sinha, famous for playing Tansen in Local Kung Fu, has some scene-stealing Inglish” dialogues.
Director Kenny Deori Basumatary said that most of the credit goes to his cast and crew for making Local Utpaat in such a cooperative spirit. “I’m very lucky to be surrounded by very talented and helpful friends and family,” he said. He also thanked the 1270+ people who contributed their hard-earned money during the crowdfunding of the film. Even Bollywood action star Vidyut Jammwal had contributed a significant amount, he said.
People were all praise for the comedy and the quick pacing of the film. This is one of the best, if not the best from the team. I expected a laugh riot and this film 200% fulfils my expectations. Really an all-out comedy from an amazingly creative team. A must-watch in theatres,” said one of the viewers at the premiere show.
To a question on releasing the film on OTT, Kenny said: “We haven’t yet made a final decision on that. We’re hoping to get a good offer.” He added that if Local Utpaat recovers its investment, then they will make Local Kung Fu 3 next. “But for that, people need to watch movies in cinema halls. Because currently, that’s the only way for Assamese films to recover their investment.”