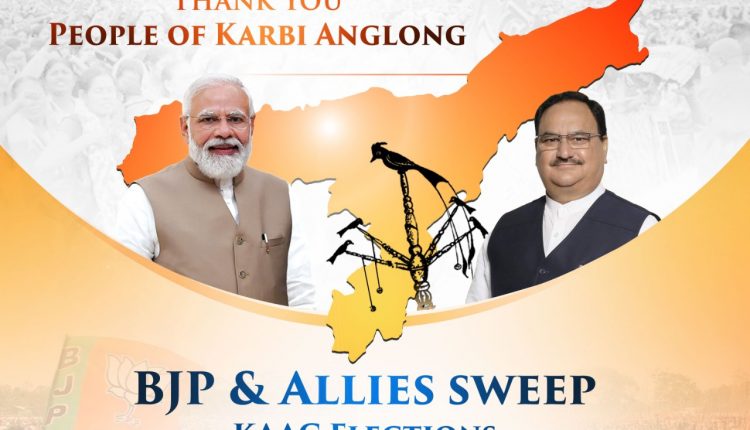 This was BJP's biggest victory in KAAC elections since its inception in 1952.

By Ranbir Hanse On Jun 13, 2022
Share FacebookTwitterWhatsAppEmailPrint
Karbi Anglong, June 13: The state’s ruling party BJP has bagged all 26 seats in Karbi Anglong Autonomous Council (KAAC), a tribal council in Assam, where the elections was conducted this month on June 8. This was BJP’s biggest victory in KAAC elections since its inception in 1952. In the elections held in 2017, the BJP had won 24 out of 26 seats.
The Congress, which was in power in the council beteeen 2001 and 2015, drew a blank while Arvind Kejriwal’s Aam Aadmi Party (AAP) did better than Congress in at least four seats. In the Guwahati Municipal Corporation (GMC) elections held in April, AAP had won one seat while Congress none.

Chief Minister, Himanta Biswa Sarma tweeted after the results of KAAC were announced on Sunday night.

We bow before people of Karbi Anglong for giving @BJP4Assam a historic mandate in KAAC polls 2nd time in a row.
After wins in urban body & GMC polls, this huge victory is a true affirmation of public trust in Adarniya PM Shri @narendramodi ji’s vision of Sabka Saath Sabka Vishwas pic.twitter.com/gY56fWWNtv

This unprecedented mandate has given us even a bigger responsibility to live up to people’s expectations, he said.

Set up under the Sixth Schedule of the Constitution, KAAC has 30 members but four members are nominated. After the BJP came to power in 2016 in the state, all executive members of KAAC had defected to the BJP and formed the council again after the elections in 2017.

The two-hills district, Karbi Anglong and West Karbi Anglong, covering four Assembly seats and a Parliamentary seat (Diphu) falls under the KAAC. The council was formed following demand by the indigenous Karbi community for protection of their identity and welfare.