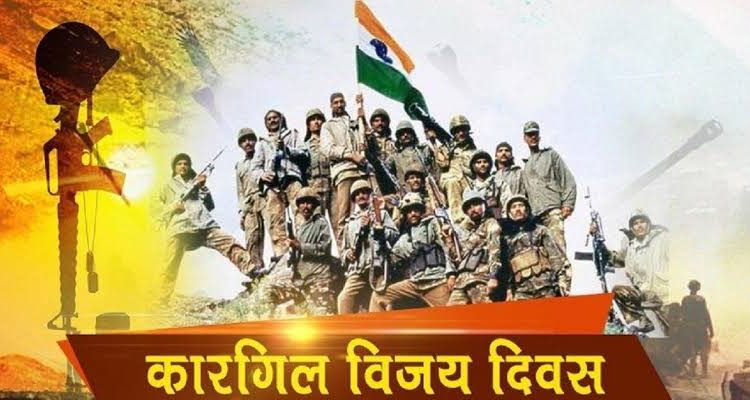 GUWAHATI,july 26: On July 26, 1999, the Indian armed forces had defeated Pakistan in the Kargil War. Since then, July 26 is celebrated as ‘Kargil Vijay Diwas’. The days honours the pride, valour and courage of the soldiers who took part in the Operation Vijay.

Prime Minister Narendra Modi on Monday paid a tribute to the martyrs of the Kargil war, which India fought with Pakistan in 1999 and won, on Kargil Vijay Diwas and said the bravery of those who sacrificed their lives motivates Indians every single day. The Prime Minister also shared an excerpt from his last year’s monthly radio programme Mann Ki Baat.

A day ahead of the Kargil Vijay Diwas on Sunday, PM Modi urged the countrymen to salute the brave hearts of Kargil in his ‘Mann Ki Baat’.

Marking the key day in Indian history, the Prime Minister said the Kargil war is a symbol of valour and discipline of our security forces which the entire world has witnessed. He said that India will celebrate this day as ‘Amrut Mahotsav’

Kargil war is a symbol of valour and discipline of our armed forces which the entire world has witnessed. I would like you to read the thrilling story of Kargil on Kargil Vijay Diwas. Let us all salute the brave hearts of Kargil,” said the Prime Minister on his 79th edition of the monthly radio programme ‘Mann ki Baat.

India will mark the 22nd anniversary on Monday with tributes from President Kovind who is visiting Drass in Ladakh and paying homage at the Kargil War memorial to the fallen heroes of the 1999 conflict. India’s Chief of Defence Staff (CDS) General Bipin Rawat will also accompany the President.

India launched Operation Vijay to clear the posts in the high-altitude Kargil sector, which was occupied by the Pakistani soldiers and infiltrators on the Indian side of the Line of Control (LoC).

The armies of the nuclear-armed nations fought the war between May and July in Kargil district of Jammu and Kashmir and elsewhere along the LoC. It took about three months for the Indian forces to recapture the posts and led to 527 deaths on India’s side.