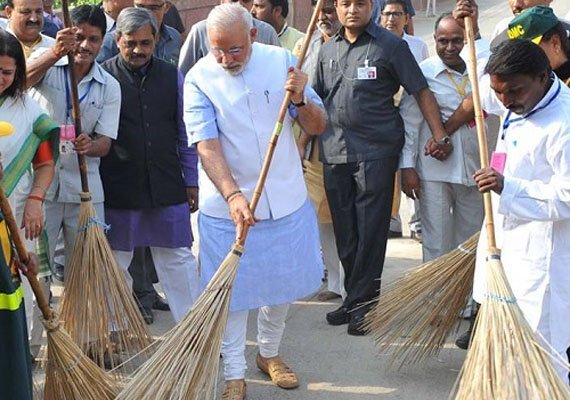 The Prime Minister said that with the Swachh Bharat 2.0 mission, his government is aiming to make the urban areas garbage-free. ‘With this second phase, we are also aiming for sewage and safety management, making cities water-secure and ensuring that the dirty drains do not merge into the rivers,’ he said. ‘The garbage mounts in cities will be processed and removed completely as part of the SBM-U second phase.’

Presumably taking a dig at his political rivals, the Prime Minister then said, ‘One such garbage mountain has been in Delhi for long, it’s also waiting to be removed.’

The Swachh Bharat Mission-Urban 2.0 envisions a plan to make all cities garbage-free by ensuring grey and black water management in all cities except those covered under AMRUT, a statement issued by the Prime Minister’s Office (PMO) said. It also aims to make all urban local bodies with a population of less than 1 lakh Open Defecation Free (ODF), thereby achieving the vision of safe sanitation in urban areas. The mission will also focus on source segregation of solid waste, utilising the principles of the three ₹of reduce, reuse, recycle, scientific processing of all types of municipal solid waste, and remediation of legacy dumpsites for effective solid waste management. The outlay of the entire SBM-U 2.0 mission is around ₹1.41 lakh crore.

The newly launched scheme Atal Mission for Rejuvenation and Urban Transformation 2.0 mission, on the other hand, is focusing on providing 100 per cent coverage of water supply to all households in around 4,700 urban local bodies by providing about 2.68 crore tap connections and 100 per cent coverage of sewerage and septage in 500 AMRUT cities by providing around 2.64 crore sewer or septage connections, which will benefit more than 10.5 crore people in urban areas.