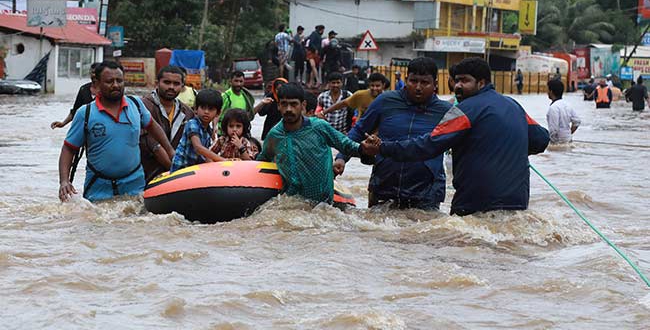 At least 18 people were death after heavy rains strike south and central Kerala on Saturday while 22 people were still missing in landslides in hilly areas of Kottayam and Idukki districts, prompting the state government to seek help of the armed forces for rescue operations.

The situation is really unpleasant in some parts of the state. We will do everything possible to save lives,’ chief minister Pinarayi Vijayan said in a statement after chairing an emergency meeting in the state capital. ‘We have sought help from the army, navy and air force. Relief camps have been set up in the districts.’

The state government was monitoring water levels in all dams, the chief minister said. Three districts — Kottayam, Pathanamthitta and Idukki — were worst affected due to the torrential rains.

The authorities have halted pilgrimage to the Sabarimala hill temple in Pathanamthitta district due to the inclement weather. All colleges and higher education centres will remain shut till Wednesday.

At least 22 people were still missing in the landslides that occurred in the hilly areas bordering the Kottayam and Idukki districts. In Idukki, bodies of two persons were retrieved after the car they were travelling in was washed away. They are yet to be identified, police said. Sixteen other rain-related deaths were reported from Pathanamthitta and Kottayam.

Most of these districts have witnessed heavy rains since Friday night. Many dams in the nearby were filled to the brim and sluice gates of some were opened to ease pressure. Some areas in Kottayam received 30 cm rainfall in the past 24 hours, the Met department said. Some areas will witness high winds, it said.

‘At least four landslips have been reported in Kottayam and the one is Kootickal is major. Many people are stranded and we have sought the help of Air Force copters to shift them,’ said state cooperation minister V N Vasavan, who hails from the district. Earlier in the day, the chief minister said six teams of the National Disaster Response Force were deployed in the affected areas and two teams of the army will be deployed. Air Force teams have been kept on standby, he said.

The government was closely monitoring the situation and at least 5,000 families have been shifted to relief camps across the state, Kerala revenue minister K Rajan said.